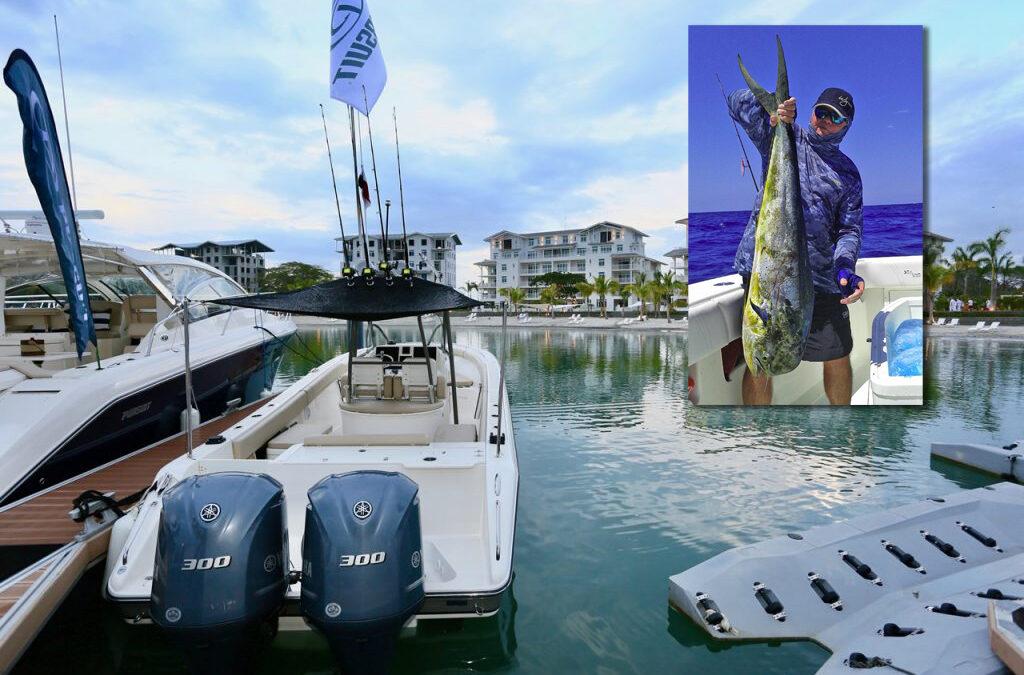 There is such a variety of fish species present in Panama, that the region is truly a fisherman’s paradise. Depending on the season and the water’s conditions, these are the most abundant species found in our waters.

Black Marlin
While the blue marlin lives in warm waters, the black ones are strictly limited to the Pacific and Indian ocean. And although the blue marlin rarely ventures into the open sea, it is known that black marlin travel around shallow banks and water closest to the coast.

Blue Marlin
Hooking and releasing a great blue marlin qualifies as the biggest challenge, feeling and accomplishment for many fishermen. Blue marlin can be caught in oceans around the world with some dead or alive bait and huge trolled lures.

Pacific Sailfish
The sailfish travels through warm waters of both the Pacific and Indian oceans. This fish tends to grow bigger than its Atlantic counterpart with fish of over 100 pounds.

Yellowfin Tuna
The yellowfin tuna (and bigeye tuna) are incredibly popular around the world amongst sports fishermen, be it to chase and shoot poppers to big schools of 20 pounders or groups of bait for the biggest yellowfin in the world (around 300 – 400 pounds) in Panamanian waters.

Snapper
Brute force is what a school of snapper is all about. To stop their power is the fisherman’s goal or they will find themselves prey to a reef or shipwreck in an instant. Pacific snapper (record: 78 pounds, 12 ounces) stalks shallow reefs where they are hoping to strike upon big poppers.

Roosterfish
The distinctive high dorsal fin, shaped as a comb, of the roosterfish illuminates the green waters of the coast excited to find live bait or poppers. Roosterfish are exclusive to eastern Pacific, where they can be captured from Baja to South America.

Amberjack
Amberjack or Reef Donkeys, are not a fish with great appearance, but they surely pull with strength. In many parts of Latin America they are known as Strong Fish. They can be found in tropical reefs both in the Atlantic and Pacific oceans.

Wahoo
Designed for speed, the wahoos are described as torpedos with fins. Many fishermen believe the wahoo is the fastest fish in the sea, and maybe size by size they are. In any case, their first run (especially if the rig is similar in size) is simply hot.

Dorado Mahi-Mahi
This fish is the most popular in open sea fishing. A hunter fish, willing to put up a fight, a determined fighter and many times acrobatic, making its capture beautiful but stubborn.

Sea Bream
The sea bream (Lisa snapper) is an elongated snapper that can be found in Eastern Pacific ocean between Baja and Peru. Different to many snappers, they are middle water fish that can be found in rocky areas of 150 feet. Sometimes they come to the surface and can be caught with poppers.

Almaco Jack
Almaco jack is a fish from the Carangidae family; they are in the same family as the yellowfin and amberjack. They feed, both day and night, on smaller fish such as bait fish and small squids. Their meat is thick and dense similar to tuna and can easily be confused with white tuna if prepared in sushi.

When To Catch What

January
One of the most prolific months for fishing, the ocean offers 100-250 pound yellowfin tuna, 100+ pound sailfish, 50-60 pound dorado as well as black and blue marlins.

February
January and February are known as “summer” in Panama, with some of the same fish species that are found in January. This month also offers striped marlin in open seas.

March
One of the best months to find big yellowfin tuna. March also offers a great quantity of black marlin, blue marlin and striped marlin. Furthermore, for those looking for coastal fishing, big roosterfish and sea bream snappers are abundant.

April
Due to this month being one of transition, the waters are rich for all types of fishing. Those looking for a coastal experience can find roosterfish, sea bream and other species. Yellowfin tuna is also abundant this time of year.

May
This is the month where swordfish fill the oceans, as a result of an increase of southern winds that provide the water with large quantities of bait fish. Successful fishing techniques include live baits such as the troll fish as well as poppers.

June
This is the beginning of roosterfish season, reaching up to 70 pounds. Sailfish are still abundant in the water as well as black, blue and striped marlin.

July
For those looking for a variety of fishes, this is one of the best months for this; black marlin, blue marlin, sailfish and dorado are all around. Fishermen that are looking to catch big roosterfish and sea bream snappers can find them if they fish by the coast.

August
You can find black marlin, blue marlin and sailfish as well as other types of marlins. It is recommended to refresh yourself by jumping in the ocean during this month.

September
With occasional showers that last less than an hour, this is the best month for fishing wahoo. Blue and black marlin are still abundant in the water.

October
While there are still some showers, this is the heart of the “green season” with the rain benefits starting to manifest. The waters hold a great amount of blue and black marlin.

November
Usually this month marks the end of the rainy season and it is one of the best months to find roosterfish and sea breams. The wait in the water is for black and blue marlin, sailfish, yellowfin tuna and 40-60 pound dorado.

December
Most of the species are abundant during this month including blue and black marlin, sailfish, yellowfin tuna, roosterfish, sea bream and dorado.

Let Buenaventura Marina be your fishing headquarters. Our state of the facilities and prime location make us the best choice for all anglers. Give us a call, 507-6565-0709, or click INFO@BV-MARINA.COM